As a driver, we do everything we can to make sure that our passengers are conveyed to their destination in comfort and safely. This means showing exceptional alertness to the roads and surroundings as well as to everything that is going on in the car.

Usually, the passengers reciprocate this by thanking you or offering a tip but a bunch of rowdy drunken lads I picked up tonight had other ideas. One lad sat behind me decided that he would reach over and put his hands over my eyes so I couldnt see where I was driving. My immediate reaction was to slam the brakes on and perform and emergency stop.

The guy in the back headbutted the seat and the guy in the front shot forward but was saved by his seatbelt. The other two people in the back were not happy with the person who had put his hands over my eyes and verbally had a go at him.

I leapt out the car, pulled the back door open and yanked this idiot out of the car onto the floor and told him that this is where the journey ends. The others apologised on his behalf and paid the fare. I told him he was lucky that I didnt give him a good hiding for what he did as it was dangerous

To my surprise, the 3 other lads took it into their own hands to sort him out and as I drove off they were kicking and punching him. I left them to it. Wasn't my problem anymore. I got paid so was quite happy.

It goes to show what a split second of an idiotic prank could do to me or the car but in this case it back fired on the prat and he got what he deserved by his mates.

Out on the roads today I was nearly caught up in an accident whilst driving down a main road at 24mph. Obviously the car coming out from the left didn't look properly and must have only glanced in my direction for him not to see me and pulled straight out in front of me. Its lucky I was only going slow and had a good reflex reaction when I did an emergency stop otherwise I could have hit him.

The oronic thing is that the car behind me was a police vehicle that witnessed what had happened as he had to brake as well to avoid hitting me. Yet, the other car carried on totally oblivious to me being there and the police vehicle also carried on rather than turn round and have works with the driver. 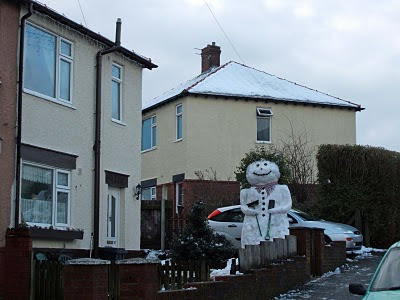 After an unexpected snowfall early this Sunday morning the streets and gardens of Barrow became home to a large assortment of snow folk. None that I saw were bigger than the one pictured above. But even apart from its huge size the clues were there that this snowperson had been built by an over competitive parent. The main thing to me was that, I know kids would never build a snowman looking out and away from their home. No matter how grand or humble the snowperson it has to be seen from the house usually from the kids bedroom window.
Talking about huge erections I was embarrassed this morning when I pointed out a large snowman to an elderly lady fare. How was I to know that the cheeky varmints that built him had made him anatomically correct!  Mind you I do think they may have exaggerated a bit but then again I’m no expert on snowman’s bits.
Posted by bob mullen at 8:21 pm 1 comment:

Well so far so good. The weekend has gone ok but its been a quiet one. The road works are causing major delays and a detour into town adding an extra mile on the journey coming from Barrow Island.

One conversation in the car this weekend between a mother and a young girl aged around 8 years old was quite enlightening. The young girl said she had a boyfriend at school and her mother asked who it was. As most 8 year olds do, they refuse to say who it is and she said "I`m not telling, its a secret". Her mother replied by saying that she shouldn't have boyfriends as she was too young to which the little girl promptly said." I need a boyfriend as I don't want to become a lesbian like my sister" I tried not to laugh at this as her mother instantly started to shout at her saying that we dont talk about things like that and its not right etc etc.

Made me laugh anyway, you don't expect a young girl to come out with that in conversation
Posted by Bill at 11:40 am 4 comments:

Not much has been happening over the last 2 weeks hence no posts but this week alone has seen so many road closures and diversions that it is not possible to get into the town centre.

The main thoroughfare into town is closed for 4 weeks but the contractors never seem to get the work done on time so I don't hold out much hope. Tonight will be the big test as the main road where all the niteclubs are is closed off meaning our busiest taxi rank is not available for use so it looks like we are going to have nowhere to park up tonight.

I wonder how the clubbers will get in and out of the niteclubs and when they do, they will have to walk a bit to find a taxi.

Other road closures in the town include one of the main routes to the next town and is a very busy road. Temporary traffic lights are causing long tailbacks all over the area and with it being Valentines weekend I reckon it could be a busy one.

Road Delays +people going out + plus valentines weekend = Pandemonium
Posted by Bill at 11:08 am 2 comments: