Some sneaky varmint in Germany is driving a car built for UK roads and has installed a Muppet in the passenger seat. The speed cameras in Germany are made to take photos of drivers who sit in the left side of the vehicle, so drivers of UK cars which are right hand drive can't be easily identified. A German police source said: “The number plate is not enough. We need clear evidence of who is driving the vehicle too."
“But because this is a British vehicle we can never get a decent picture. The driver has obviously worked this out because he has placed a large puppet in the passenger seat.“This may be an example of the famous British sense of humour but it is still dangerous driving. The driver has been caught on camera on several occasions and the puppet is on the passenger seat every time. We suspect he positions the toy deliberately before accelerating past the camera.”
Posted by bob mullen at 7:42 pm 5 comments:

Sometimes when you get a funny noise coming from under the car its best just to ignore it and it will go away. But then again sometimes it won't eh?

See more funny videos at Funny or Die
Posted by bob mullen at 10:22 am 3 comments:

Lately Saturday nights have been turning out to be a little bit on the quiet side, so what’s going on? Is it the so called credit crunch or even as some believe the start of a full blown recession. Well I don't think so myself I put the blame fairly and squarely on ITV. They are stealing the peak Saturday night trade away from the pubs and clubs and more importantly from the taxi trade. Saturday night from until is dominated by that popular cult TV show the X-Factor. Why I don't know because I don't watch it, but on Saturday night it dominated the conversation of the fares I picked up, some of whom were actually going to X-Factor parties. What that involves, I don't have a clue but it sure seems popular. Even worse news was told to me by one fan that was dashing between two x-factor parties; apparently the series lasts right up until near Christmas. Why can't these TV companies be made to show this stuff during the week instead of wrecking the whole country’s night time economy?
One interesting snippet that I did get told on Saturday night from a reliable source fascinated me no end. The new club which is due to open shortly, CLUB-M has been fitted with a new entrance solely for the use of the local emergency services. This I am told is so paramedics can attend to injured or ill folk and cops can remove troublemakers all without going through the crowded club. But the best bit is that the club has actually got its own padded cells to detain folk and prevent them from injuring themselves or others. The polite name they tell me is the detention or holding area. But a cell is a cell to me and I wonder is it legal, can they actually detain someone against their will? Would it not be false imprisonment, is it a step too far?
Posted by bob mullen at 7:00 pm 11 comments: 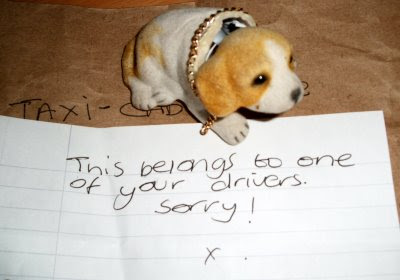 A rather mysterious large bulky brown envelope arrived at out taxi office this week. At first we were a bit nervous about opening it because of the strange shape that could be felt inside. When we finally decided that it probably wasn't a bomb our brave boss felt inside the package. He went a shade paler when he felt something slightly furry. But taking a deep breath he fearlessly hauled the unknown beast out of it's hiding place and we were confronted with a small version of the nodding dog mascot which you see on some folks car parcel shelves. Attached was a handwritten note which reads "This belongs to one of your drivers. Sorry!" So far he or she hasn't been claimed by any of our drivers and rumours are rife about the adventures of the lost doggy. Has a dog napping taken place, and the villain had a twinge of conscience? Has someone picked up the wrong dog by mistake or maybe a child took a fancy to our driver’s lucky mascot. The lost doggy is being held to ransom by the boss until the £1:50p shortfall that wasn't paid on the postage is handed over.

This one although American is just as relevant over here at the moment.