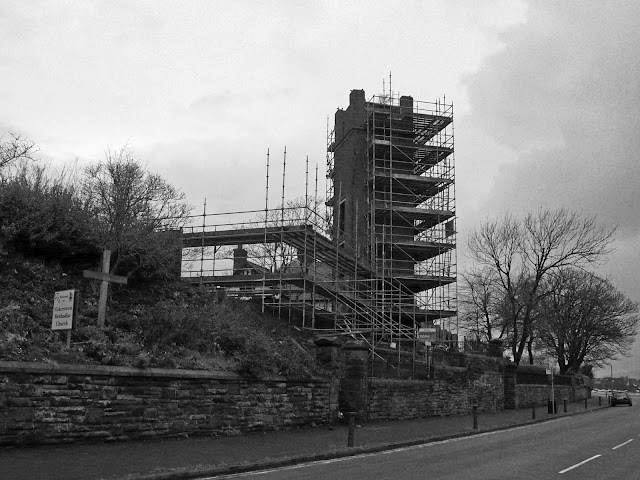 I had picked up from a local supermarket; my fare was a middle aged woman who started to whinge about everything and anything from the very moment she got into the taxi.
She was going to Walney island and on the way started to whinge about problems she had about the island, after a moan about the wind which is always prevalent over there she started on the subject of new folks moving on to the island. "The bloody p***i's are taking over the place" she moaned, "They are even taking over the bloody pubs," she cried.
She explained what she meant in a long racist rant which boiled down to that some Asians had taken on a local island pub the King Alfred and turned part of it into an Indian restaurant and renaming it the Mr Elephant, and then they had gone on to take over the George Hotel another island pub which has long been in decline.
Driving along Walneys promenade, she looked up towards what was a long abandoned church which has now been demolished apart from its bell tower and was covered by scaffolding.
“What are they doing there?” she asked pointing at the tower.
Instantly my evil alter ego kicked in and keeping a straight face, I lied to her that it was going to be the new mosque for all the muslins moving onto Walney.
Egged on by the look of sheer outrage on her face I went on to say that they had left the bell tower intact to convert to a minaret so that the call to prayer could be heard all over the island.

She was still muttering and plotting petitions and letters to her MP when I dropped her off ten minutes later.
I keep laughing about it every time I drive past the pretend mosque several times a day; hope she doesn’t remember me next time I pick her up eh!
Posted by bob mullen at 8:52 pm 10 comments: