Today it felt like I had blundered into the set for a thirties murder mystery play. I was given a number to ring in regard to a job going to Yorkshire on Monday, when the guy answered he said I want you to come down and meet me I must access your character to see if you are trustworthy, this is a very important task I am setting you. And so a little while later I arrived at his large detached house and rang the bell. A chap of about sixty opened the door and said so you’re the driver then I replied yes and he just stood and looked at me for a full minute then he said right follow me. I was led into a house through rooms tastefully decorated with paintings and antique furniture and into a study sit down he said pointing to a chair in front of an ornate desk. The next few minutes were spent with him asking me questions and him writing down the answers, just simple stuff like address age etc, he then produced two printed sheets of paper with precise instructions and times including the code for an electric gate and where I was to park on arrival.” Right sign both copies please “he then went on to tell me that the task was to take a small antique table to the address in Yorkshire and then return with a passenger to an address printed on the instructions. But he said “, and this is very important you must hand this sealed letter to the passenger and tell her she must read it on the journey” And so I was given the table and the payment on the way out, don’t know what to make of it really but I shall see what Monday brings.
Posted by bob mullen at 8:16 pm 2 comments:

It's a bit of a standing joke with some of my regulars when I get on their street I will say something like” which house is it again is it the one with the dirty curtains” or” is it the one on the rough end of the street”. But sometimes I do slip up and say things like that to people who I don’t know, like today I said “oh you mean the one with the scruffy garden “ the lady didn’t look amused. There was a local driver who is retired now but who was well known for making remarks when he picked up or dropped of passengers, he would say such things as” that door could do with a coat of paint” or that crass needs cutting and your hedge trimming” and “you can buy a brush and shovel cheap enough you know”
Posted by bob mullen at 7:48 pm No comments:

Email ThisBlogThis!Share to TwitterShare to FacebookShare to Pinterest
Labels: Barrow in Furness, quirky

Some people get a bit mixed up with what the meter measures on their journey, I have been asked to slow down so the meter will go slower and on the other extreme been asked to drive faster so the journey ends sooner. A lot don't realize that it's done on distance and a mile is a mile no matter how quickly or slowly it's covered.

Posted by bob mullen at 6:53 pm No comments:

You never know what's coming next on this job or where it will take you. Today I was due to finish at 5pm but at 4: 45pm I got a job from the town centre and when I got to the pickup point I was handed a large parcel and an address in Fleetwood, Turns out I was to be one of Santa’s little helpers the parcel was a child's present which had to get to Fleetwood in time for Christmas the following day. This involved a round trip of 146 miles and so I never arrived home until 8:30 that night, still it worked out OK in the end the parents of the kid were happy.
Posted by bob mullen at 8:41 pm No comments:

We tend to call the Friday before Christmas black eye Friday round here. It's the day most people finish work for the Christmas holidays, they tend to finish work early about lunch time and they then head straight down to the pub for a long boozy session. I find it amusing when it gets to about four p.m I pick some of them up to go home and they are telling me what a good night they have had, they are convinced that because it's dark that it must be late at night. Once a year drunks I call them the worst kind because they aren't used to it, they take ages to get out of the car because you are their new best friend and they want to tell you their life story many times very slowly.
Still merry Christmas to all cheers. 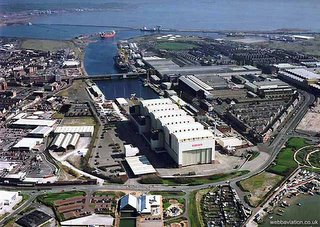 Some brilliant stuff on Wikipedia
it's a good research tool here's an aerial photo I stole. As with all photos on this blog you can click on them to enlarge to the original size.

Posted by bob mullen at 3:43 pm No comments:

I was talking to an old lady of about seventy today when she used a expression I had never heard before, and never by a respectable old lady. She said” I have just had visitors and I was a bit embarrassed my house is as messy as a whore’s garret” Good one I think
Posted by bob mullen at 8:28 pm 2 comments:

Picked a guy up a while back now who upon being asked are you ok when he got in the cab looked around furtively and replied “can't say too much they are listening you know, it’s the cameras they are everywhere he then put his fingers to his mouth and whispered “shhh” and began searching the car for hidden cameras. He didn't find any but he never said another word for the rest of the journey. But Bill another cabbie does have a cctv camera in his cab and he did get some photos of the guy on a later day I suppose it was a bit cruel of us to print a few off and post them outside his house, I still feel a bit guilty.
Posted by bob mullen at 7:59 pm 4 comments:

How many people can say that a perfect stranger has got into their car and within five minutes ends up talking about sex? This happened to me yesterday she was a perfectly respectable middle aged lady who some how got on to the subject of how young people are too open about sex and that people of her generation just don’t talk about it, she then went on to mention prostitutes, transsexuals, gays and extra marital affairs, all within a ten minute journey. Don’t suppose she would do the same with a bus driver or a shopkeeper strange eh!
Posted by bob mullen at 6:26 pm 3 comments:

The local budget filmmakers have just released a new film called Lament have a look if you have broadband.

A lady from the Philippines was unburdening herself to me today about her boyfriend problems, at least I think that what she was trying to say but unfortunately I could not understand ninety per cent of what she was saying. Still I did understand that by the time I dropped her off she felt a lot better after the conversation, I think!
Posted by bob mullen at 9:13 pm No comments: 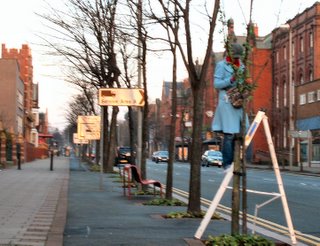 Wonder why this woman (pictured) is up a ladder on Abbey Rd tying mistletoe to a tree? Seems a strange thing to do not a local custom I’ve ever heard of.
Went on a twelve mile tour today looking for my fares car he couldn’t remember were he left it last night, make me wonder what sort of state he was in, still it cost him twelve pounds in the end.
Posted by bob mullen at 6:52 pm 1 comment:

I can tell it's getting near to Christmas now, all the old ladies say when they get in the cab "I'll be glad when it's all over with".They say the same every year don't know why, after all their is no law to say they have to celebrate Christmas.

Posted by bob mullen at 7:43 pm No comments: 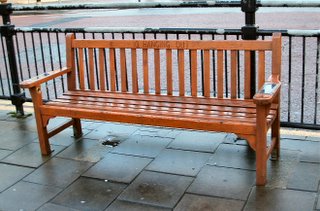 During the summer months I picked up two South African guys from a local hotel. On the way to their destination one of them asked to be shown the famous talking benches of Barrow. He had read about them in some obscure magazine in Malaysia. One is pictured above their are about ten or twelve scattered about the town centre, they are solar powered and the idea is that you plug your walkman headphones in and it tells you a story or reads you a poem. I have never had a listen myself but people who have tell me they are ok but the stories and poems they tell are not locally based, which would have been a far better idea.
Posted by bob mullen at 9:05 pm 1 comment:

Picked a couple up they had obviously been out all night,but they were both going to Walney Island the guy to the north and the lady a couple miles away to the south. When we stopped to let the guy out he leaned back into the car and said to the lady in a really loud voice "thanks luv best sex I have ever had"(He did use an old anglo saxon term really but I won't go there). He then shut the door and walked off she of course had to sit there for the rest of the journey she went very red and swore very quietly for the rest of the journey.

Smokers must think that we hide round the corner until the moment they light up, this seems to happen time and time again with me,but they don't get in my car till they put the cigarette out. But it does amuse me how they try to get a few last puffs they will walk right round the other side of the car slowly and stop to adjust their shoes or clothes anything to stall for a few more puffs.
Posted by bob mullen at 7:47 pm 1 comment:

Talking to a fare today who had just got back from the Falkland Islands, he works out there for six months at a time. Their are about a hundred sheep to every man he was telling me, so I asked him if he knew all his by their first names.
Lots of daft people up ladders round here putting up Christmas lights, looking at some of the dodgy ladders I can see the local casualty department doing a good trade.
Posted by bob mullen at 7:21 pm No comments:

A poem and links

Here’s a poem by Island Monkey called” Here’s to the Taxi Drivers” good eh! Found a new one to me “Man of lettuce” which is a blog by an Aussie cabbie some good stuff on this one. And here’s one from Singapore from the other side of the fence about taxi drivers from a passengers viewpoint “The Taxi Man Says”.
Posted by bob mullen at 5:20 pm 1 comment: