I had picked my very first job of the day up this morning at about 7.30 am and it was to be just a short ride into town, I was talking away with the fare when I saw a guy with a loose dog on the pavement up ahead, luckily I braked and slowed just in case.But yes you’ve guessed it the dog runs straight into the front of the taxi, I could see it coming but couldn’t stop in time, then comes the sickening bang and the dog disappears. Luckily for the dog, I was driving a modern car with a plastic bumper which is shaped to help save pedestrians by hitting low and scooping them up onto the bonnet and saving them from going under the car.And so in what seemed like slow motion to me a large brown dog appeared on the front of my bonnet looking straight at me with surprised big brown eyes. Apart from a few brown hairs, there was not a mark on the car, oh and the dog was okay too. The guy with the dog was as drunk as a skunk and didn’t say a word he just stood in the road swaying gently back and forth until his wife led him away. All was well and so we set off again and only got a few hundred yards when the local postman who was walking along sorting his letters sauntered out straight in front of us, after another narrow miss I considered making the first job of the day my last.
Posted by bob mullen at 7:48 pm 13 comments: 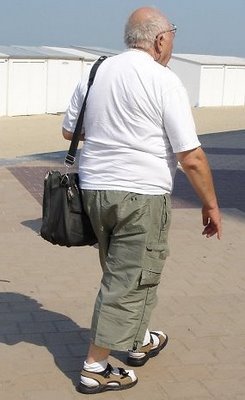 Now you may not believe this but the taxi drivers here in Barrow aren’t really well known for their sense of style. But what with the heat wave which we have been experiencing for the last week or two, some of them have really surpassed themselves some of the tee shirts and shorts look like they were bought on some long ago foreign holiday at a time when the driver had had a good sample of the local tipple. Maybe at some time, they may have fitted as well, who knows but sadly with the ravages of too many pies and fries that’s not the case now. One driver I saw today broke all the rules cargo style three-quarter length pants (guys when you reach a certain age and size just don’t do it) and a black and white vest top way too small, looking down past the glimpse of white calves revealed black socks (pulled well up) and open toed sandals. But all was explained when I saw that he was proudly sporting in his left ear the biggest shiniest bluetooth I had ever seen, the radio waves from this must have caused temporary insanity.
Posted by bob mullen at 6:39 pm 10 comments:

I went out on a job to a country lane near the small town of Dalton-in-Furness when I got there it was a driving school car which had broken down miles from anywhere. The two passengers wanted to go to the Driving Test Centre and they explained that one was a driving test examiner and the other was actually taking his test when they had broken down. Well this was a first for me but I guess it does happen now and then, funny thing was that I felt a bit nervous with a driving examiner in the back of the cab and found myself driving as if I was on some sort of test myself. When we got back to the test centre the driving school instructor, who owned the car was waiting outside and you should have seen his face when his pupil and the examiner got out of the cab, he must have been thinking that his car had been wrecked. I ended up driving the instructor and the pupil home after that and the instructor was telling me that it was going to work out rather expensive for him as they are self-employed like us and like us no car no work, which means no income.
Posted by bob mullen at 8:19 pm 33 comments: