I had picked up a fare today, an ould lass going into town to get some last minute Christmas shopping. She was excitedly telling me that she was going to get presents for her little ones, as it was their very first Christmas. Now as she looked to be in her seventies I presumed that she must have been talking about her grandchildren.
I’m going to get them an activity centre, a climbing frame, a little tent to hide in, lots of cuddly toys and some chewy treats she said breathlessly.
Don’t you think that’s a bit too much and far to early, for that age they will be more interested in playing with the wrapping paper and boxes at that age I suggested helpfully.
She laughed and said, “Yes they will love that won’t they, oh and I must get a CD of Christmas carols for them to listen to whilst they have Christmas dinner”
Now I was getting confused and beginning to consider calling social services to rescue these two mistreated mites, so I asked if that since it was their first Christmas are they twins perhaps. Oh yes she said laughing crazily “ones brown and the others black”


All sorts went through my mind until it finally sunk into my poor confused head that she was talking about her newly acquired kittens! Dohhh!
Posted by bob mullen at 8:28 pm No comments:

Up here in this part of the North of England, we tend to call the last Friday before Christmas “Black Eye Friday”. It's the day most people finish work for the Christmas holidays, they tend to finish work early about lunch time and they then head straight down to the pub for a long boozy session.
I find it amusing when it gets to about four o’clock in the afternoon I then start to pickup some of the less hardened boozers when they have had enough and want to go home.  Lots of them are then telling me what a good night they have had; they are convinced that because it's dark that it must be very very late at night. I never tell them any different and just drive them home.
Once a year drunks I call them the very worst kind of drinker because they just aren't used to it, give me a seasoned drinker anytime.  They take ages to come out of the pub shaking hands, hugging everyone in sight, and then going back into the pub several times for yet more emotional farewells. Then once you get them into the taxi, the struggle is then to get them out of the taxi at the other end, because you are, their new very best friend in the whole wide world and they want to tell you their life story many times very very slowly and emotionally. Then its handshakes and if I’m very unlucky big bear hugs, but of course none of my new found best friends ever recognise me ever again.

Still merry Christmas and seasons greetings to all cheers.
Posted by bob mullen at 8:49 pm No comments:

Priest In The Confession Seat

When a fare takes the option of walking past the front passenger door and ensconcing themselves behind me, I sometimes mention that they have taken the confessional seat. This happened today with a chap who was going to a local Catholic church, St Mary's in Barrow town centre.

"Funny you should say that" he said, "Because I am a clergyman".
Now driving a taxi is a great leveller and be they prince or pauper when in my taxi they are all treated as an equal to me and so I started out with a gentle mickey take. You will be looking forward to this cold spell that they are forecasting then. I asked with a straight face.
“Whys that then” he asked sounding puzzled. Well it will lead to a nice increase in funerals for you and a few more bob on the collection plate.
He realised that I was pulling his leg and laughed along with me when I said have you noticed in the local paper obituaries that they all die in alphabetical order. I am changing my name to Zebedee then he replied and then we got down to the real nitty gritty,
I mean you can’t have a priest in the confession seat without talking religion can you.
I told him my view that the Furness area had always attracted religious elements even though it was at one time even more remote than today and could only be reached by crossing the treacherous sands of Morecambe bay.
We first must have had going by the stone circle on Birkrigg common druids or sun worshipers of some kind then of course, we have the Cistercians who founded the monastery at Furness Abbey in 1147, followed by the Quakers in the 1650s some say Furness was the birthplace of Quakerism.
Then we have strangely in the 1970s the arrival of Buddhists at Conishead priory now the Manjushri Centre with its newly built golden temple.
He was more than a little interested in the Buddhists and told me that they are not the usual Zen Buddhists but a Tibetan sect called Kadampa who have a different set of beliefs and philosophy which he had studied and didn’t agree with, he of course preferred Christianity.
After a very interesting conversation when we arrived at his church and he was getting out I asked (already knowing the answer) which is older then Christianity or Buddhism then?  Buddhism is he said smiling as he passed the alms for this poor taxi driver. 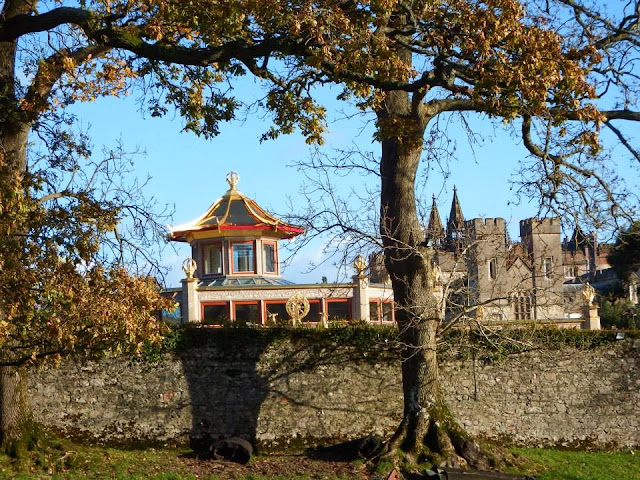 Today (Sunday) had a strange vodka theme running right through it.
One of the first fares was sporting the most swollen most multi-coloured bruised face I have ever seen and without me even asking him he tells me the tale of him being stabbed in the face by "a friend"
"Aye we had both been on the VODKA" he said by way of explanation and then asked me to take him to a shop who would sell him a bottle of VODKA at 9am on a Sunday morning. The VODKA he told me was a sweetener for his alcoholic girlfriend who he had fallen out with after drinking too much VODKA.
Lots of supermarket pickups after that with people starting to get their Christmas booze supplies in including lots of them with bottles of this weeks special offer on VODKA.
Later one fare was walking away from the taxi when I heard the sound of breaking glass my fares bottle of VODKA had come right through the bottom of her plastic bag. She took this rather badly and for a respectable looking middle aged lady she sure knew some swear words. But luckily for me she hired me again to take her back to the shop to replace the bottle of VODKA with a new one.
Later I was taking  a young lass to a pub she was going out for the afternoon and she told me that she had been out the night before and instead of paying high pub prices for her drinks she had hidden a bottle of VODKA in her bag.
The last job of the day and again it was someone going out to the pub for the evening and the lass was on the phone to her mates who were already in the pub waiting for her. "Can you get me a drink in" she asked them  and when they agreed she said "aye make it a double VODKA and coke".
On the way home I noticed that the Town Hall flag was flying but I was too far away to see which flag it was I wouldn't have been at all surprised to see that it was a Smirnoff flag flying because we sure contribute to the profits of the VODKA trade round here.

Posted by bob mullen at 7:06 pm No comments: