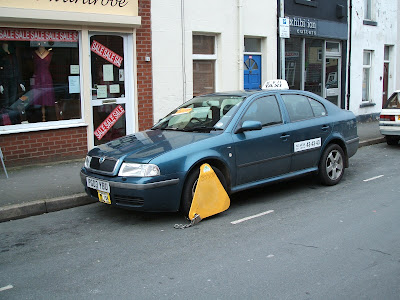 A local cabbie come back to his car which had been left untaxed on Barrows Cavendish Street and found that he had been clamped. Just goes to show that you can't get away with it nowadays.
The car in question is not one of our firms by the way, but a frantic check was carried out to make sure that all the fleet were up to date with tax was started straight away.
Posted by bob mullen at 8:55 pm

no excuse for not being legal in our game, guaranteed to meet a checkpoint

Where I work, we remove untaxed vehicles, but I've never yet had a Taxi removed. Only once spotted an out-of-date disc on a Taxi, but I wasn't able to check with DVLA to see if it really was untaxed that day.

Reminds me of the New Year's Eve when Janitor Jim left his cab running at midnight to go into the Bear to have a couple of drinks at midnight. When he came out the cops had locked down his cab. He was terrified that he'd be fired, but the only price he paid was making no money on one of the best nights of the year.

Your previous post reminds me of a cold winter night when I was passing another Badger Cab on the passenger side, as we drove out Johnson, at bar time. As I was pulling even with the rear bumper of the other cab I said to the 3 drunk college boys in the back seat, "That gentlemen is Perfesser Neil Boy's cab. You may moon him if you wish."

As I pulled ahead of Neil's cab I heard the kid sitting behind me gasp, "GOD DAMN!!! That glass is cold!!!!

Glad you are posting again, Bob. Was that your bum in the woolworth window? haha funny picture!

Happened to me once and I had a fireman friend saw th sucker off with the saw they cut roofs with....Good times!!

One of our drivers who is also a good friend of mine was lapsed a couple days and needed to go pay the city and renew his taxi license. I found this out by my boss (English is not his first language) telling me "Josh is expired". I called Josh and asked if he was still alive and told him. =)

Hi Bob we don't get clamped anymore in London, just a parking ticket but they are shit hot on dishing them out.
Be lucky, love your blogs,keep up the good work.

ouch thats got to hurt, hope he didnt get clamped before the weekend. my car died on a friday after i paid my settle and it wasnt nice.. and that reminds me, my tax is about to run out!