Our Molly An Update 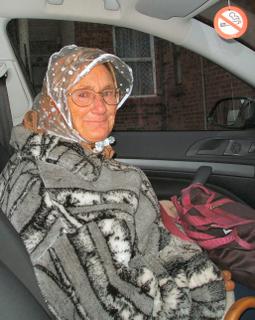 The piece on Molly below was posted way back in Oct 2005.
Some twelve months later Molly disappeared from sight and I sadly had to assume that she had either died or gone into a care home. Despite asking folk about her I heard nothing about her until today more than eight years later!.
An elderly lady I had picked up happened to know her well and told me that despite being nearly totally blind and deaf Molly still lives independently on her beloved Barrow Island.
Because of her horrific experience of being in the care system for forty years Molly refuses to contemplate going into a care home.  Even though being totally house bound and dependent  on home carers she is the lady tells me still cheerful soul and is now well into her ninety's.


OUR MOLLY
This is our Molly,my favorite fare a happy lady who uses our cabs five or six times a day.

But let’s look behind the smiling eyes, Born  in 1920 that makes her 85 Years of age.
She lost both her parents at a very early age, mother when she was four and then father at six. Taken in by an aunt for a while she started to suffer from epileptic fit’s the aunt told her she was to go into a hospital for a short while, this ended up being for the next FORTY YEARS.
Why? Because she suffered from epilepsy and back then you would be hidden away in an institute out of sight out of mind.
Molly struggled when she was released because she had become institutionalized most things we take for granted like paying bills getting insurance, she had never ever done
At the age of sixty Molly was talked into marriage , she never even knew her husband could neither read or write until he was unable to sign the marriage register on their wedding day . This marriage lasted for nine years and then because of her husbands death and the fact that she was living with his parents she became homeless, but instead of going into care Molly found herself a flat and a community who adopted her and she has lived happily ever since on Barrow Island.
Posted by bob mullen at 6:37 pm

Email ThisBlogThis!Share to TwitterShare to FacebookShare to Pinterest
Labels: Barrow in Furness, character

Thanks for the update Bob. Brings a tear to the eye the way she has lived her life.