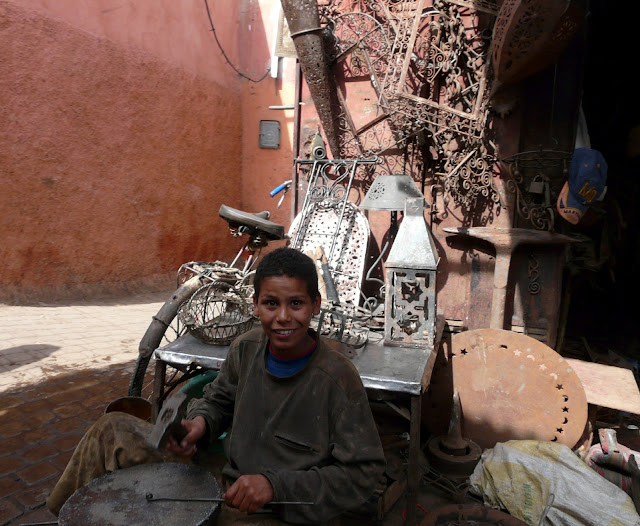 Well certainly turned out to be a bit of a culture shock in more ways than one.
Firstly to witness the poverty and hardship which is endured by most Moroccans with a smile is a humbling experience. Some rural folk out in the desert still live as they did in biblical times, eking out a meagre living with herds of goats and making the trek to the distant water well by donkey. Looking out the window at the pouring down rain, which everyone has been moaning about here in Barrow is a stark contrast to a country where a lot of children have never even seen rain, the last decent downpour was nine years ago!
Then at the other end of the scale we were told of an Arab multi billionaire who was spending tens of millions to move a giant cement factory, lock stock and barrel, ten miles up the road just because it spoils the view from his newly constructed huge luxury palace.
Wondering down the beach promenade at night was at first a bit daunting even at one or two o-clock in the morning crowds of twenty or thirty thousand local folks were wondering about. After a while we noticed that most people were in family groups ranging from grandma down to young babes, all simply enjoying themselves. The very idea of even one family walking about late at night like this in Barrow town centre particularly down our infamous Gaza Strip just doesn't bear thinking about.
What makes the big difference of course is that even though it is available most locals just don't touch alcohol. It really is refreshing to walk down the street at night and not have to dodge the pools of vomit and suffer the intimidating behavior of aggressive drunks.
Walking down the prom on the last night I spotted something which brought back distant memories of trips to Walney beach and gathering winkles. vendor was selling freshly cooked bowls of the delicacy complete with the obligatory pin to tease them from the shells. After eating a half dozen or so it finally dawned on me that they weren't winkles at all, just common garden snails cooked in brine. The missus always said I would eat owt. I guess she is right.
Posted by bob mullen at 6:01 pm

It sounds as though you had a great holiday Bob, was it very hot? The way you describe the poverty and affluence side by side reminds me of when my sister went to tunisia many years ago as she said it was like that there. Families living under tarpaulins when not far up the road people were living in luxury, it makes you feel uncomfortable to think of it. So many people in this country have so much yet they still aren't satisfied.

Anon: yep had a great holiday thanks. They tell me it's like Tunisia but even poorer, they don't have a lot of natural resources.

We went to Tunisia a few years ago (before the 2nd Gulf war) and it seems to be very similar to your story. I'm glad you had a good time. My own husband will eat owt on holiday as well!!

Peggy: folk who have visited both country's tell me that the Moroccans seem to be nicer folk.